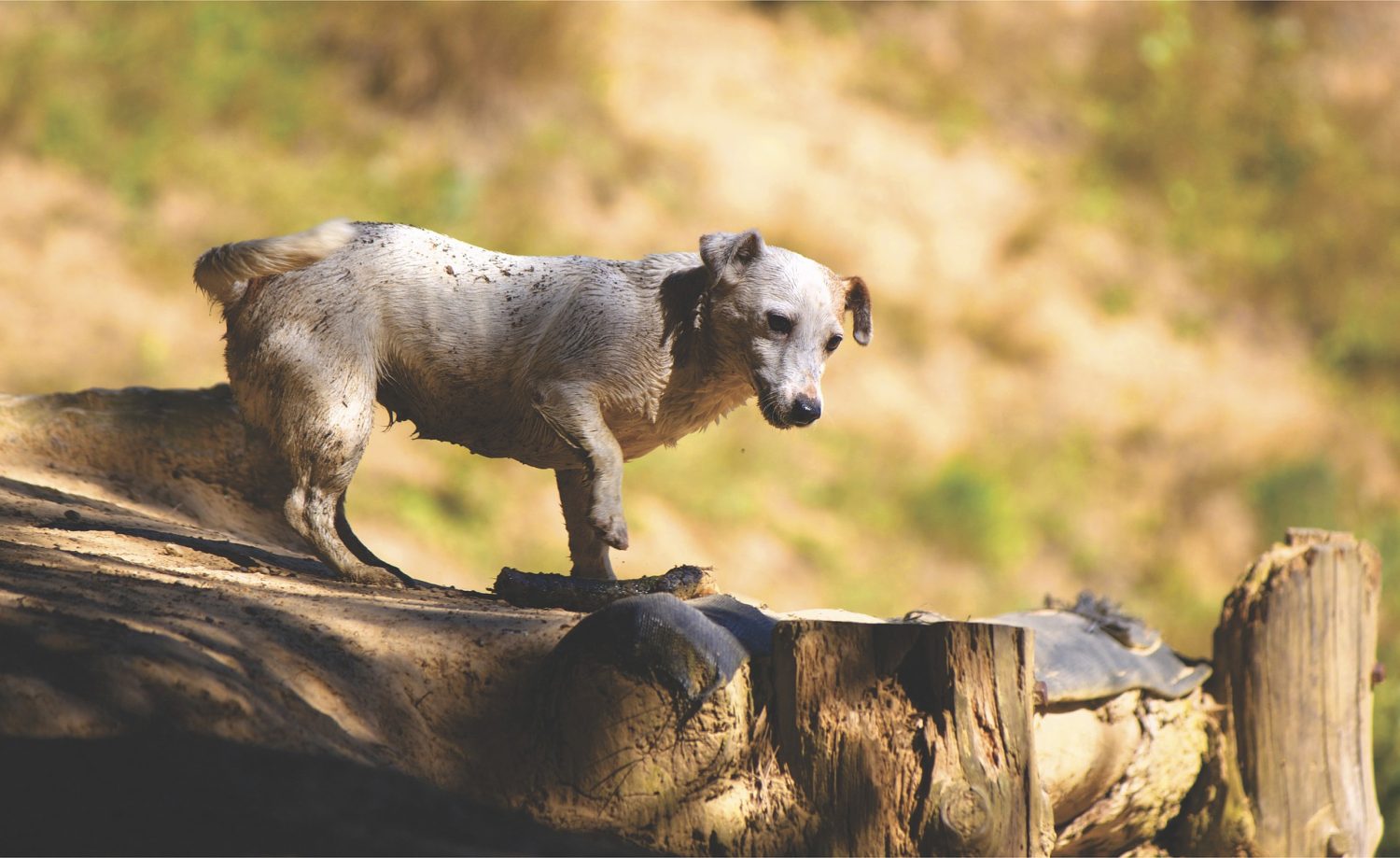 Looking For The Best Dog Wormer For All Worms?

Here’s a look at our favorites, including our top pick – 8in1 Safe-Guard Canine De-wormer for Dogs, 3-Day Treatment.

#1 Best Dog Wormer For All Worms

Let’s start off by putting your mind at ease—you were probably horrified when the veterinarian told you that your dog has worms, but it’s important to understand that it’s no reflection on you. Dogs are highly susceptible to parasitic diseases, and roundworms and tapeworms are fairly common. In fact, you may be surprised to hear that some puppies are even born with tapeworms.

If you haven’t gone to the veterinarian yet but you’re concerned that your dog has worms, here are a few symptoms to watch out for:

What to look for in a dog wormer

The good news is that worms and parasitic diseases are fairly simple to treat, and most treatments are 100% effective at removing the worms after a single treatment cycle. There are a number of over-the-counter medications that are just as effective as prescription medication but with a significantly lower price tag. If you’re looking for an over-the-counter solution, here are a few things to look for: 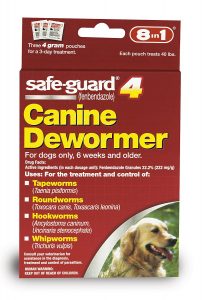 The Safe-Guard Canine De-wormer uses fenbendazole—the same active ingredient in prescription canine de-wormers—to treat eight strains of whipworms, hookworms, roundworms, and tapeworms. Each dose is a highly palatable granule that can easily mix into your dog’s food (which is much easier than trying to force down a tablet).

The pack comes with three packets, which is enough for a three-day treatment cycle for dogs that are less than 40 pounds. Three-day treatments last for up to six months. The Safe-Guard Canine De-wormer is safe to use with puppies as young as six weeks-old and pregnant dogs, and it is approved by the FDA. 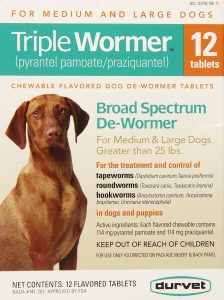 Durvet Triple Wormer is a great broad spectrum de-wormer that kills seven strains of roundworms, hookworms, and tapeworms. The box comes with 12 easy-to-administer chewable tablets, which is more than enough to do several treatments for even the largest dogs (there’s enough to administer three doses to a dog that’s over 150 pounds).

Each dose contains 114 mg of pyrantel pamoate and 114 mg of praziquantel. Durvet is an over-the-counter medication, and it has been approved by the FDA. Note that the medication is intended for dogs who are 12 weeks or older, and it is not recommended for breeding or pregnant dogs. 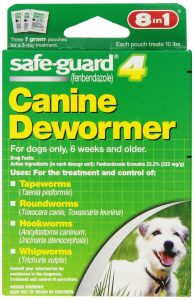 If you have a small dog that weighs less than 10 pounds, you’ll want to get a very light de-wormer treatment that won’t harm their digestive system. This pack from Safe-Guard is the same 8-in-1 de-worming treatment discussed previously, only this time it comes in much smaller dosages that are intended for small dogs.

As with the medium-dog version it uses fenbendazole to treat roundworms, tapeworms, whipworms, and hookworms, and the medication is approved by the FDA. 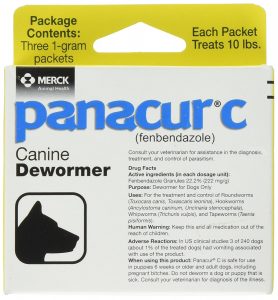 The Panacur Canine Dewormer is another fenbendazole-based over-the-counter medication that’s proven to be effective against tapeworms, roundworms, whipworms, hookworms, and other parasites. Each pack comes with three packets of medication for a three-day treatment cycle, and you can get different sized packets depending on how large your dog is. The treatments are granulated, so they’re easy to mix with your dog’s food when administering the treatments.

Virbantel is an over-the-counter canine medication that treats and controls tapeworms, hookworms, and roundworms. Like the Durvet de-wormer, the active ingredients in this medication are pyrantel pamoate and praziquantel.

The tablets aren’t as easy to administer as granulated doses that blend in with food, but the tablets are flavored to taste like a doggie treat so it’s not as bad as you’d think. Virbantel is safe to use on puppies that are at least 12-weeks-old, and it’s approved by the FDA.

If you suspect that your dog has intestinal parasites, you should take your dog to the veterinarian before administering a de-worming treatment. Nine times out of ten the vet will confirm the diagnosis and give you the green light to begin treatment with an over-the-counter de-wormer, but sometimes the symptoms that accompany worms are actually a sign of more serious health conditions.

"I started Pets-Life last year with one goal in mind, to answer all the questions that I know busy pet owners have. I wanted to make buying new products for your pets quick and easy." 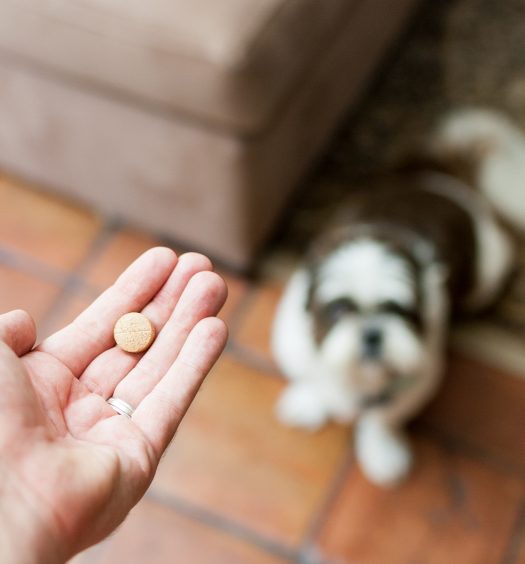 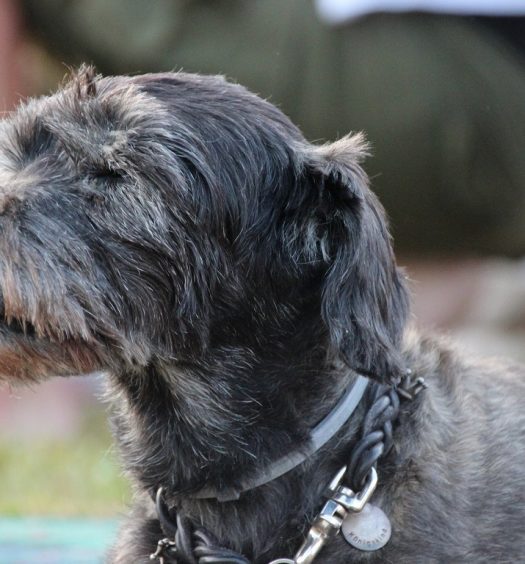